Prologue: Back when we were living in California, Scott and the boys landed on an old-time barbershop that was unique for many reasons, not the least of which was the Elvis impersonator owner.

After their first visit to the place, Scott admitted to me he was totally afraid of the Elvis guy and really didn’t want him cutting his hair. But Charlie thought the Elivs dude was cool and Max just wanted his haircut and maybe a Grilled Chicken sandwich from the Subway next door.

After maybe their third or fourth monthly visit to this barbershop, the Bollinger Boys came back with a story. It was a doozie.

Max: (entering the kitchen door, shaking his head from side to side and muttering fiercely) Oh. My. God.

Max: That was a scene. Never again. Gonna do my haircuts on my own from now on.

Cassie: (to Scott, just entering the door) What happened?! Did his ear get nicked? Was there bleeding? WHAT?!

Cassie: Oh my God. Something bad? How bad?

Max: Oh it was bad alright.

Charlie: (coming in the door behind the other two) Pffft. It wasn’t that bad.

Scott: A form of regurgitation.

Max: I told him not to go for that hard ball candy from the gum machine thingie.

Charlie: You never know what flavor you’re going to get! You know what I mean?! It’s just random! So disgusting.

Scott: You could say that again.

Max: Which is exactly why I told you not to get one.

Charlie: It was some flavor…like root beer mixed with grape. (shivers)

Charlie: I’ll never be able to erase the taste. (does a fake retch…at least I think it’s fake, but his eyes seem to be watering)

Cassie: So this happened WHILE he was getting his haircut?

Scott: No, he was done with his cut. Max and I were in the chairs. I was dozing. Max, were you dozing?

Max: Not really. I saw him pop that thang in and I knew there was going to be trouble. It was brown. The gum ball was brown. Total mistake.

Scott: So then I wasn’t dozing anymore because there was this eruption. With gurgling sounds. Like a dog who’s bitten into a poisonous frog.

Max: The amount of froth. He was literally bubbling at the mouth.

Cassie: Was it one of those trick candies or something?

Max: It wasn’t a trick candy. He just didn’t like the taste, so he wouldn’t swallow and all this brown stuff started to dribble out.

Cassie: Why didn’t you do something?!

Max: What would I do Mom? In this instance? The stupidity. Charlie. (shaking his head again) Dad was sitting right there.

Scott: I woke up. Saw the eruption. And told him to go outside and take care of it.

Max: So he horked up right outside the door.

Cassie: Of the barbershop?!!!

Max: Yep. The owner….Elvis guy wasn’t too happy. They all thought he puked.

Charlie: It wasn’t puke. It was just spit.

Max: It was really embarrassing. And disgusting. And then he tried to wipe his tongue off. Like that’s going to work. And there was a lot of spitting. Right outside the front door of the barbershop.

Cassie: What’d ya do? (looking at Scott)

Scott: Me?! Nothing. I was getting my hair cut.

Cassie: Oh my god. You just sat there?

Cassie: (looking at Max) Why didn’t YOU do something?

Max: I told him not to put that thing in his mouth. Besides one of the barber guys, not Elvis (I think he might have been gagging), started hosing the whole front door area down right away.

Scott: Yea. Max and I finished our cuts. Charlie scraped his tongue. And we left. I tipped them extra.

Scott: I did. Really.

Max: Yea, but we’ll never be able to go back.

Scott: (sighing) They were good too. Good barbers.

Max: Yea. They were. Just had to have that gum ball. Huh, Charlie? 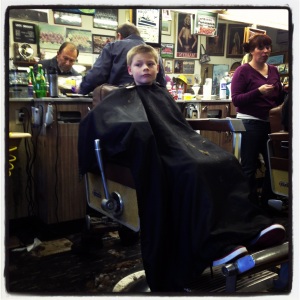 Two months later, we found ourselves in a real hair cut jam. Max and Charlie needed haircuts BADLY. They really wanted to go back to Elvis’ place. They convinced me it would be worth the side glances we might get walking into the barbershop where “Charlie The Gum Ball Puker” had made such a scene. We walked in and the guys, including Elvis himself, welcomed us with big smiles and a couple of “Where you guys been?” The boys sat right down and got cuts.

Max: Thank God you didn’t bring up the incident.

Cassie: I would never. They seemed genuinely happy to see us.

Max: Yea, that was a little strange. Like they’d forgotten about the whole thing.

Max: Elvis probably got rid of it because of Charlie The Kid.

Charlie: Thank God they got rid of that thing. I mean really. Thank God!