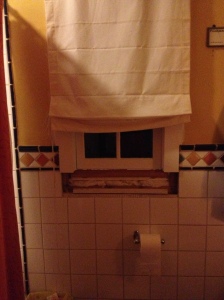 Cassie: What’s this? This is definitely not what I hoped to come home to this evening.

Max: There was a situation.

Max: Well…yeah and you weren’t coming home. Where the Hell were you?

Cassie: At the music concert. I left you a voice mail.

Cassie: Jesus. So when’s it going to get fixed? Like, could you fix that right up now? That’s kind of ugly.

Max: (rapid blinking) This weekend. I’ll fix it over the weekend.

Scott: You bet your ass you will.

Cassie: Why didn’t you use the spare key?

Max: WHERE IS IT, huh? No spare key that I could find.

Scott: The spare key seems to be a mystery…since we moved back…not in the usual spot. Maybe it’s never been there since we got back. I dunno.

Cassie: (sighing) So we have this? This window molding ripped away from the wall? I really wish it could be fixed this instant.

Scott: This weekend. (Scott turns away and walks down the hall to go down the back stairs.)

(Later….while sitting next to each other on the couch in the Great Room and watching television, Scott and I talk. Scott’s not so casually presenting his back to me so that I will scratch it.)

Cassie: I don’t understand…why was the molding ripped away from the wall? The window was locked? But the window wasn’t damaged…just the molding…I don’t get it.

Scott: (sighing) The window was open. “Mr. Galumph” stepped onto the window sill when squeezing into the window and his weight and clumsiness tore off the sill and the molding. The sill in the bathroom is barely there, you know…it’s like the one in the laundry room – small sill.

Cassie: Oh. (Pause) How did he get onto the roof to begin with?

Scott: I don’t know. Pulled himself up. (Pause) From the railings on the front porch.

Scott: Pffft. A half hour ago you were pissed. Now you’re impressed?

Cassie: Maybe a little. I would never think to do that. Or have the skill or strength.

Scott: (with a condescending tone) I know, honey.

Cassie: What? And you would?

Scott: Cassie, I’m skilled at breaking into my own house. I’ve done it many times.

Scott: Once or twice. Broke out a small cellar window. Very easy to replace Don’t you remember?

Scott: It was a long time ago. (Pause) I think you were pregnant and had to use the bathroom. You were going nuts. (Another pause) And then when I was a kid…I did it many times. Late for curfew…forgot my key…you know.

Scott: No. There are a lot of girls who know how to do this as well.

Cassie: But since I was a goody goody girl…and never even had a curfew…and never forgot my key…except that one time…when I was a guest at someone’s house that summer…

Scott: Yea…Whatever. Look this shit won’t happen again. I’ll get a spare key for everyone in the whole neighborhood so we have ample back-up and Max will fix the window on Saturday. I’m done talking about this.

Cassie: Aren’t you going to help him?

Cassie: I don’t want him using a wood saw.

Cassie: Now you’re mad? Because he broke the molding?

Scott: Thanks. Scratch my back.