I was whining to Chloe about the fact that Scott’s and my wedding anniversary was approaching. Coming as it does the same weekend as Father’s Day, I’m always floundering for ideas about gifts, cards, little sweet somethings I can present to mark these meaningful days in the life of my best friend. We’ve been together in marriage for sixteen years (twenty if you count the four years we lived together in New York City and Weehawken, NJ, before our wedding).

Money’s been a little tight lately (as we still seem to be catching our collective breath from the move east coast to west) and at the same time trying to lay the groundwork for wiping the debt slate clean, so we can go into debt again while all four of our kids (hopefully) attend college. (We realized the other day, while discussing graduations and the upcoming high school years for Max, that we will each be sixty years old by the time Genevieve finally graduates from high school. A stunning revelation that is still reverberating in my mind.)

“We’ll probably just go out to dinner some place nice,” I say quietly to Chloe. “You and Max will have to babysit. We’ll find a place close by,” I continue. Chloe’s not looking at me, though. Her eyes are focused on a distant speck outside of the kitchen window. She’s pensive. I know that look. Some philosophical realization or question is about to come my way.

“How did you know Dad was the one for you?” She turns her gaze from the window to my face, eyes open wide, her brightly shining blues fierce and expectant.

And there it is. The wedding discussion has now taken a completely new turn.

Usually, whenever the subject of our wedding day comes up (a conversation most often instigated by Chloe since Charlie and Max have no interest in the happy tale and Genevieve always wants to know why she wasn’t at the wedding), there are the expected questions about:

the dress (it was tight and form-fitting, a sleeveless number with lots of beading)

the weather (it was so incredibly hot in the Columbia University chapel where our ceremony was held that the male guests were forced to take off their suit coats and many of them ended up with the backs of the chapel pew-chairs permanently stained and imprinted onto their sweaty, shirted backs; the women fanned themselves constantly with the wedding programs throughout the entire ceremony)

and who was nervous (Scott)

and who was excited, still claiming it was the best day of her life (Cassie).

Yes, the “how did you know question” hanging in the air is not like all the other wedding talks Chloe and I have shared in the past. How did I know that her dad was the man for me? Silence…I am thinking how best to answer.

Should I talk about the physical attraction? How a certain look from Scott, with those dark blue eyes and that crooked smile, can make me dissolve rapidly into a giant puddle of goo? No, she might not be ready to hear that just yet (maybe never).

Should I explain that sometimes I am a bad person? I can be cruel and mean with my thoughts, words and deeds and despite all that, yes, in spite of my many mistakes as I struggle to adapt to the changes and challenges presented in my life, he still loves me. I might disappoint her.

Should I mention that I fell so deeply into everything “Scott” when I first met him that I nearly drowned myself in his very essence, that I forgot where he ended and I began? There was no separation. When we were first together (and for a good long while after), I let other important friendships (both male and female) crumble around me. All I wanted was him…his breath…his skin…his mind…his vision…his spirit. I temporarily lost myself and had to struggle very hard to find air so that I could breathe on my own again. I might frighten her.

Could I say that when you love someone so deeply, when the match is so fitting, you are suddenly more than willing to take the risk of marriage with that person? Because marriage is a risk. When you project into the future, you envision that you will always stand side by side as each of you grows and changes, that your “rates of change” will always remain at the same moderate speed. If for some reason they don’t, if one person happens to move faster than the other, you are certain (in your projection into the future) that you will still remain close enough to hold onto each other tightly…until one of you catches up or slows down for the other. Some couples are able to hold on when those rates alter; others are not. I might worry her.

Do I mention that the love changes profoundly with children, that the love knot that was once so tight between just the two of you somehow expands and stretches many times over when there is a child? If this love bond is strong and malleable enough, the stretching that occurs won’t cause the knot to strain – becoming too tight or causing the fibers to snap. The durable knot comes to rest deep within the core of the entire family now; it holds the family together so that even when the husband and wife find a moment alone to be together, they are not ever really alone. Their love has ripple effects that can be felt by all the members of the family. It becomes difficult to distinguish between the husband-wife love and the parent-child love. It’s all just love…tight, intertwining, never-ending, even in death. She might not understand.

In the silent space between her question and my answer, there is not enough time to think of all the things I might say to her of the profound love I have for her father, my husband. And the truth is…I don’t really know how I knew that he was the one for me. Can I tell her just that? 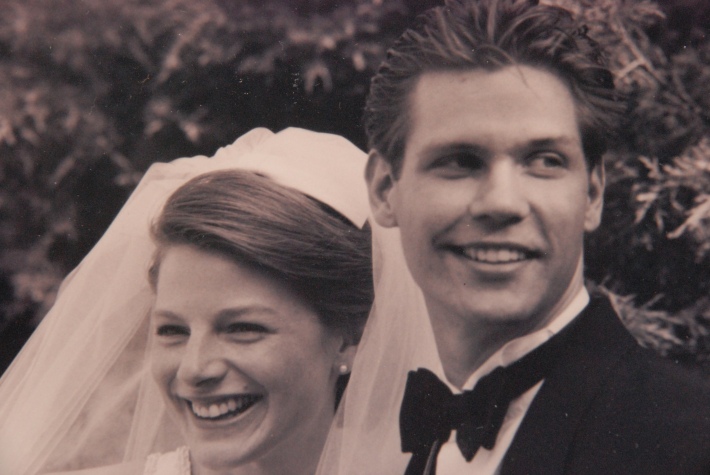 One thought on “How Did You Know? #1 QueenBeePost Top Ten Posts”