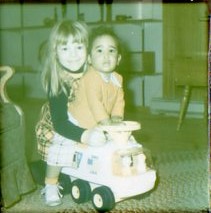 The middle aged woman can see crisply only a few memories of that time, more than forty years ago, when her adopted brother came into her family. These memories flicker in and out of her mind from time to time, often triggered by a personal photograph of her brother, or when she sees the word “adoption” in a book, a newspaper, a magazine article. One image, out of many that are quite hazy at the edges, will suddenly become crisp. A clear memory flashes in her mind and a few of the details from that time fall into place. One flash is perhaps followed by another and the images come faster, quickly imprinting a whole scene on her brain.

The adult woman has never been able to go to an airport without catching glimpses of these memories, both the hazy ones and the sharp ones that cause the imprinting. She remembers back to when she was five years old….when she waited with her grandparents in the plastic airport waiting room chair… for her new baby brother to arrive from Florida. The Boston airport air was stale, tinged with cigarette smoke and airplane fuel. She remembers being told by her grandfather that her parents’ plane had landed, that her new baby brother would be arriving at any moment. Two large cream colored doors across from the seating area were opened by a blue uniformed woman. A long carpeted hallway could be seen, winding its way to beyond …to the outside air? No, it was explained, the curvy hallway led to the plane itself; the bending worm tunnel fit snugly against the door of the plane, from which the passengers would depart, walk the tunnel and finally arrive at this doorway. Soon. They would be here any second. The grandparents promised.

The five-year-old girl peered around the doors, waiting to fix her eyes on the first passengers to tread the curvy plank and come toward her. All at once, she heard voices and the pounding of feet. “Here they come! Here they come!” she shouted, bouncing with excitement. Her grandmother held her hand firmly. “Settle down,” she murmured. “They’ll be here in a few more seconds.” But the grandmother’s eyes were fervently scanning all the faces coming their way, straining to glimpse her people, those passengers belonging to her. The five year old squealed with delight when, suddenly, she caught sight of her parents, just steps away. Her mother held a bundle of yellow blankets in her arms. “My brother! My new baby brother,” the little girl shouted over and over. The small group of airport strangers, travelers and those having come to meet passengers, gathered in the waiting room around the newly reunited family with the infant and watched the scene unfold.

The five-year-old girl was the first to hold the baby as she sat primly in the plastic airport chair. The baby smelled sour but the girl was overcome with love for the infant boy, whose skin was a light brown color. His hair appeared as tufts of soft black curls at the top of his head. The infant’s eyes were not only large but the darkest of brown. It was impossible for the older child to decipher the iris from the pupil as she stared into the deep dark circles of brown. The girl kissed the baby’s puffy, tear-streaked cheeks, pushing her lips, rather forcefully, into one side of the brown face, then the other.

In his crib, later that night, the baby fussed and gurgled. The girl, an older sister now, was allowed to watch the baby while he settled into his new sleeping quarters, as long as she remained quiet and calm. In the darkened room, the girl could barely make out the body of the dark skinned baby; her eyes had not yet adjusted to the absence of light. She could make out her new brother’s kicks; his feet raised upward and pushed against the air jerkily. She continued to search the dark crib space for any little movement he made, and despite all the background chatter coming from the adults who visited in her grandparents’ living room, the older child listened intently to every one of the baby’s sounds, every intake of breath, every squawk. She hoped the squawks would not turn into whimpers or cries, because that would surely cause her parents to rush in.

Her mother had given the baby boy a bath when they arrived back at the grandparents’ home. The sweet soap had masked the baby’s sweat and spit-up smell. His clean perfume wafted up to her from where he lay, kicking, stirring, cooing. A small dribble of drool had pooled by his head. The girl reached in between the slats of the crib to touch his cheek, his lips, his chin. Then, she held the baby’s fist in her hand and watched him breathe for a long time.